JAF PROTEST AGAINST INCREMENTS OF FUEL HIKE AND ELECTRICITY TARIFF 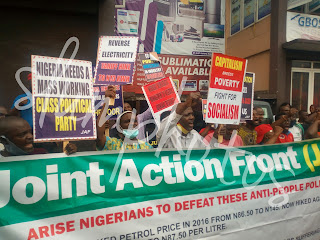 Lagos - Wednesday 16/9/2020 affiliates members of the Joint Action Front, JAF, organised a protest rally, that is, a week after the one organised by SPN on party deregistration and the fuel hike.

The protest rally was to demand the total reversal of the N160 (which marketers already are selling for  N183) fuel hike and the 100% electricity tariff hike the Buhari administration has implemented.

Before the kick off from the NLC Secretariat, Yaba Lagos. The leadership of JAF, in the person of Abiodun Aremu, Achike and others  addressed the press, present to cover the protest march.

According to Abiodun Aremu he said, "the deregulation of the oil sector won't make fuel available or Nigerians to buy cheaper. Instead, what it will do is to put more money in the pocket of the capitalist politicians."

Other speakers like Sina Odugbemi,  Achike also spoke. Achike said "Nigerians should not accept this pump price increment from the regime. We should oppose it and get ourselves organized as working people. That is why JAF is out to mobilize Nigerians."

Adeola Soetan (DSM) also addressed the press, and he said, "the marketers are the government, that is, the capitalist politicians. That this increments wont solve the problem but harden to the suffering of the Nigerian masses." 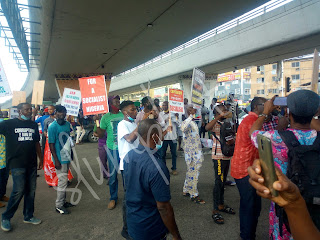 A lot of civil society group and socialist activists in different organizations including individuals from genuine background of struggles, were present to join in the protest march with placards that have sharp demands and leaflets to circulate.

Thousands of JAF leaflets calling for mass actions were widely circulated. Also, other groups like the DSM, MSA, RevolutionNow etc circulated theirs and have discussions with people, who empathize with the protest march.

At Ojuelegba under bridge, leaders of JAF addressed the working masses, on why the mass should begin to get themselves organized, to reject the policies of the Buhari led regime of APC (PDP), that have decided to add more burden and suffering on the working masses.

The leadership also used the medium to call on the NLC, TUC to commence actions against anti-mass capitalists programme of deregulation and privatization of both the oil sector and other key sectors of the economy.

On the part of the NLC, according to report from the dailies. The NLC led Wabba and Ajaero leadership said, they are giving the federal government "seven days" ultimatum, to reverse the fuel hike increment and the electricity tariff. 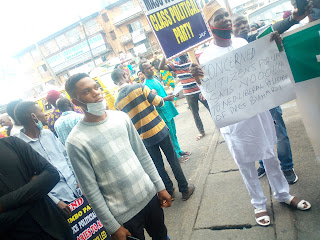 That failing to reverse both increments of fuel hike and electricity tariff,  which is to burden the Nigerian people. The NLC, TUC will mobilise all its affiliates members for industrial action, that will imprisoned the Nigerian government and profit driven system.

On the protest march, that is, immediately after the people were addressed at Ojuelegba under bridge, and the march continue to Lawanson road. The Nigerian police of the Area C Command, Ojuelegba/Yaba, in their hundreds  invaded the march from going forward.

Leaders of the front, that is, JAF, in the persons of Achike, Abiodun Aremu, Sina Odugbemi etc were arrested including more than thirty persons or so, who were squeezed into two of the police van.

Before the protesters were cart away in the police van. Nigerians, traders, workers etc on the lawanson road, had started enchanting solidarity songs to free the protesters. There were huge anger already from the people against the method of police brutality.

Indeed, the police on their part, who were fully armed, showed resistances by forcefully arrested some of the protesters in spite of the enchanted songs of "free them", which in Forty Five minutes hold ransom the Nigerian police Force, in taking any decisive action, not until they shamefully drove their vans with the arrested protesters in it. 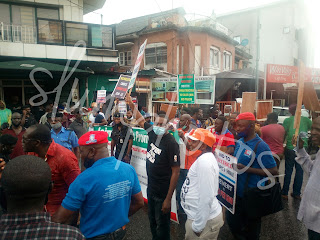 Seeing the crowd building up and solidarity songs breaking wave, the area commander and the DPO (names anonymous) of the Ojuelegba Police Command, ordered their men to drive the arrested protesters to their station.

After a short while, the arrested persons were free at the Ojuelegba police command, Area C. This was done because of the pressure especially at the scene of the unlawful arrest that Nigerians frown at. Even agitated against when the NPF wanted to open fire to disperse the crowd.

The Joint Action Front in its speeches especially from leaders of the affiliates have used the protest march to call on NLC and TUC to commence mobilizations of workers and the Nigerian masses to reject both increments.

Also, to openly confront the system of capitalism by organising actions that will force the regime to reverse the fuel hike and electricity tariff. Other socialist activists and organizations like MSA, DSM etc shared in this light.

However, in their leaflets mentioned that the time for the labour leaders to commence the building of a mass political alternative is eminent.  Perhaps, the working masses must begin to consciously take charge to bring a socialist transformation via socialist revolution. 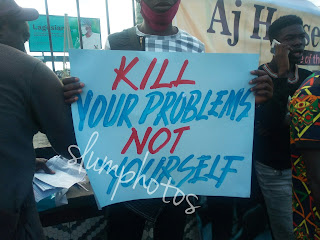 At the September 10 World Suicide Prevention Day, a literary organization named: Aj House of Poetry organised a public awareness on "March Against Suicide." And members of Movement for a Socialist Alternative, and also, Nigerian Union of Teachers, Ajeromi Ifelodun branch were there to show solidarity to the group for organizing such a public awareness.

At exactly 7am, the group was out at Boundary square to sensitized residents and working people, on the challenges attached to suicide and why the increase, calls on the government to begin addressing what is leading to people committing suicide. Hundreds of the MSA leaflets on join the "March Against Suicide! March to Smash Capitalism" was widely circulated. The group also circulated their own leaflet on "World Suicide Prevention Day. Join the March Against Suicide."

Some of the placards raised has the following demands and slogans: "Life is Precious, Please Don't Waste It. No Matter What, Life is Hope. Free Treatment and Therapy for All Depressed Persons in the General Hospitals. Aj House of Poetry Say Yes to Life. No to Suicide! Support Allowances for All Young School Leavers! 5. Your life is Precious, More Than Gold. Don't Give Up! 6. Kill your Problems.  Not Yourself!" And other key demands not captured. 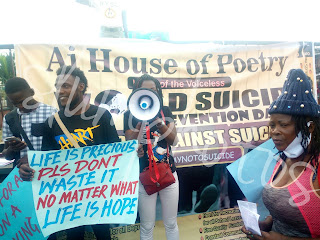 Some of the key leading members of the group address the public. Kemi Bakare, a poet and a coordinator of the group said "the increase of suicide is link to the social realities of life that is pushing people to attempt killing themselves" Others persons like Clementina Solutionist noted the same challenges on why depressed people need a medical advice, if provided.  Also, meeting the right persons for parental advice. Bestman Michael, secretary of the group and a member of MSA also address the public.

Fundamentally, he pointed out the reality responsible to people taking their lives because of the increase of poverty under the system of profit. That the increase of poverty, in addition, with the recent increase in oil pump price and electricity tariff, will definitely add to the burden of people especially the working masses. That policies like this, no doubt, will lead people into depression, which will amount to attempting suicide.

One of the trade unionists, NUT, Anita Asokomhe, who is also a teacher in government primary public school noted that "the problem of suicide is not ethnicity but the lack of adequate provision of basic social infrastructure." This comment was sharpen by Ifeoma Obi, who in her speech said that "the government should create free medical Centre for all depressed persons." That such health center should be adequately be equipped with all the basic facilities. 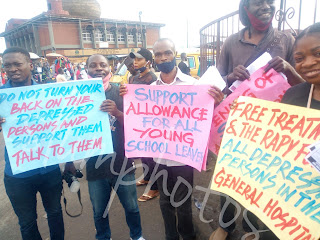 Members of MSA, who were at the sensitization ground, in the persons of Davy, Tunde and Dagga spoke. The comrades on their part were able to use the World Suicide Prevention Day to raise fundamental perspective leading to suicide. The Nigeria debt profile of N31 trillion was mentioned by Tunde when he spoke. He noted more disasters awaits Nigerians under the system of profit. He said, "due to the increase of poverty and the economic hardship, working class families are passing through has led, in recent time, three young people to commit suicide in where he reside .

Davy who spoke also uses the medium to call on the NLC and TUC to commence the process of organizing total reversal of the oil pump price and increments in electricity tariff. That with this recent policies of the government, it will definitely add to the suffering of the mass, who on daily basis are struggling to survive the already over burden policies of the capitalist politicians. The comrade shared light on the NBS statistics on the 27.1%  unemployed Nigerians, where young people of 15-34 are the majority.

Dagga, the spoke person for MSA, and chairman of NUT AJIF branch, also noted that the government has failed to improve the lot of the working masses, despite the enormous resources the country has. The question of adequate funding of public education and the health sector was also raised. The members of MSA used the public awareness initiated by Aj HOP, to fundamentally shift the blame to the system of capitalism as being raised in their MSA leaflets: March Against Suicide! March to Smash Capitalism"

Scientifically, MSA in its leaflets states that "many of the persons that has committed suicide as recorded in Nigeria, has done so because of the economic pressure they faced." It also states "without a plan socialist planned economy, democratically managed by a workers and poor farmers' government that will nationalized the key resources of the country, for developing the means of production and meeting the needs of the working masses; poverty, inequality and the hard realities pushing people to commit suicide will continue."

The World Suicide Prevention Day was also used to call on young people, writers, poets and the working masses to join the Movement for a Socialist Alternative in order to build a political alternative with clear socialist programmes, which the comrades in their speeches crested on the street can only be possible, if the mass are organized. Four members of MSA and three trade unionists, that is, NUT were at the event to show solidarity to the group: Aj House of  Poetry. The awareness lasted for three hours.